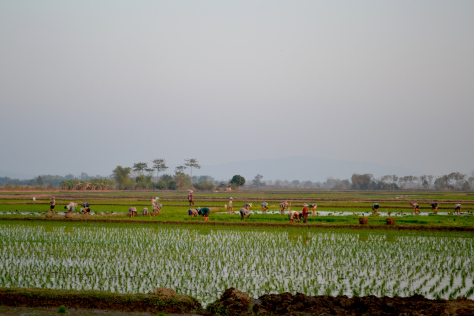 “I want you to understand... that if you’re here today saying, 'I’m going to run my life... I’m going to do it my way!' you are taking something that does not belong to you. One day, it will be reclaimed by the One who owns it… be careful. God is not someone to be trifled with.”

I sat in the morning service, the truth striking regret into my soul. I couldn’t look around. Could they see the guilt on my face? It was April, I had just returned from my time in Thailand.

My mind went back. Sunny days followed by the chill of a Thai winter. Discomfort being replaced by the slow onset of being at home. When I blogged or when I called home, I kept many of the deeper struggles hidden.

I had a stumbling block. This was one that spanned most of my teen-aged years and had crept into my time in Thailand.

I have worn skirts all of my life, except in my home. We are allowed to wear sweatpants to bed as pajamas or on snow days and Christmas. I am more comfortable in my sweatpants and have always preferred to wear them.

Fast-forward to Thailand. I am in the midst of my fourth month. Most of the kids have left on their summer break and we are a small and intimate group at the Home. So, I started to do what I did at home. Wear my sweatpants around. First it was just in the girl’s dorm. Then I ventured out to lunch and dinner a few times at the mess hall. Then, I was wearing them pretty consistently on Saturdays.

What’s the big deal? You ask.

You are preaching to the choir, sister. I had every excuse in the book. It’s not wrong. I am more comfortable in pants and I am better able to play with the kids in them. They’re used to it, they aren’t offended that I’m wearing them.

In the end it became very clear to me. My standard was based on what other people thought. It also became very clear that the older boys at the Home very much approved of my switch. They aren’t American boys. The first time I wore pants in front of them, they broke out into a chorus of approval.

You see, boys do notice the difference. Your body is meant to be a secret and they actually realize that. When you break your own code, they notice. You are supposed to be something that is searched out, not displayed.

God started to show me that pants were not just about comfort. I was wearing them to be admired.

He convicted me. I repented.

So followed the struggle that spanned several months. There were many times I experienced victory. Many times I fell.

Why did I let it continue on?

I didn’t fear God. I didn’t believe Him.

He was showing me what was good. He had told me that He did not want me to dress like that. I was responsible for these boys.

“Therefore to him that knoweth to do good, and doeth it not, to him it is sin.”

One Sunday afternoon, I went to my room in the dorms to change out of my Sunday-best into more casual wear. For a literal hour I wrestled with God. When I walked out, I was wearing sweatpants.

I mounted the steps going up, ignoring the pull in my chest. Suddenly, I almost heard someone say,

I stopped. I went back inside. I changed.

I went and joined the kids. Around 3 o’clock, someone announced it was time to swim.

I love swimming. I was also the one elected to be lifeguard. I went home and slipped into those tight pants. There was the pull again and in an instant I had made my decision. Do you want to know how I answered the voice inside?

“Lord, if someone is drowning, how will I rescue them in a skirt?”

Sigh. Another article on pants.

Nope. This is an article on obedience. I was rebelling. I’ve always been a rebel. God knew my heart. The issue will never be about pants. The issue will always be that I knew what God wanted and I told Him, “No.”

I watched his grandmother as sobs wracked her body. I sat in the cinderblock, single-room home next to sacks of rice they had harvested and stared up at his picture over the tiny coffin. They served me coffee and rice gruel as guilt made my throat ache.

When people told me it wasn’t my fault, they meant that as a lifeguard I couldn’t have seen him slip under the surface of the muddy water and never come up. That when I gave him CPR and mouth-to-mouth he was already gone. I could never tell them why I still felt guilty.

The only way I could bear it is God’s goodness. Eleven kids saved. People whose lives were touched by the story. I know there was a larger picture that I didn’t see, I know that there was a purpose to Song’s life and his death that I am not a part of. I do not claim ownership for that alone. However, I know what God taught me. I have felt the firm hand of his punishment.

That morning as I sat and listened to Pastor preach, my heart beat loudly and I felt fear for the ones who were listening but sit in rebellion.

I did not believe God. Please, be careful. God is not someone to be trifled with.

Going back in my story and rewriting past words, To make me look better would make me worse. For though I regret deeply my ways, Out of those depths comes much deeper praise. Would I love Him like this, if I could not see, Through all of my sin, His goodness to me? And so through my doubts of how He can use me, I see in those days, He chose then to choose me. Would I praise Him more for my goodness or His? I know the answer and I have learned this, That God balanced perfectly those victories and losses, To prepare me for future blessings and crosses. So in coming storms I can bow down and say, “You led me back then, so I’ll follow today.”