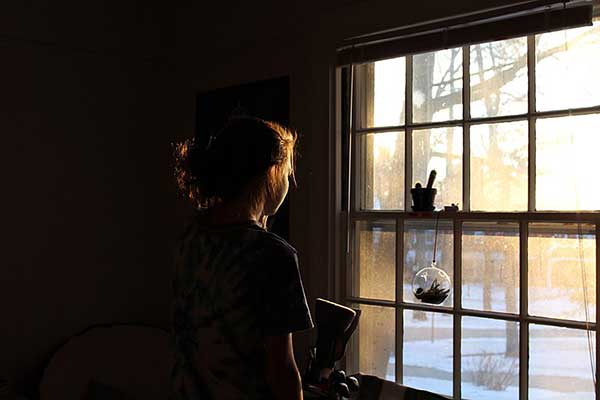 As we begin this New Year 2022, our thoughts look back at the past almost 2 years of this new reality—lockdowns, restrictions, hand sanitizer, social distancing, masks, vaccines, sickness, death, etc, etc.

Conspiracy theories abound. Fake news is everywhere. Who do you listen to? Who can you believe? How can you make intelligent decisions when you do not know whether the information you are hearing is even true? Has our world gone entirely crazy?

So many people are in despair and truly paralyzed with fear. We see it all around us. I heard just this week of two older men that attempted suicide. One was in his 90’s, the other almost 90 years old. One was successful in his suicide attempt, one was not. What would cause a 90-year old man to want to take his own life? I can think of only one thing—despair.

As I was thinking on these things this week, my mind went to the prophet Jeremiah. He had experienced some terrible things. God had commissioned him to preach of the coming judgment to the people, but no one wanted to hear his message. No one wanted to heed his warnings.

Then the enemy came and his warnings became reality. Imagine his despair as he watched the city of Jerusalem being destroyed by the invading army. Imagine his hopelessness as he looked around and saw nothing but death and disease and destruction.

You can sense some of his despair as you read Lamentations chapter 3. Up until this point in the book, Jeremiah had been discussing Jerusalem and the people of Israel. But now he turns it to personal—how has this affected him. As I read these verses, I was struck by all the personal pronouns, starting in verse one. Notice how this trial had affected him personally:

“I am the man that hath seen affliction by the rod of his wrath. He hath led me, and brought me into darkness, not into light. Surely against me is he turned; He turneth his hand against me all the day. My flesh and my skin hath he made old; he hath broken my bones. He hath builded against me, and compassed me with gall. He hath set me in dark places, as they that be dead of old. He hath hedged me about, that I cannot get out: he hath made my chain heavy. Also when I cry and shout, he shutteth out my prayer.” Lamentations 3:1-8

Can’t you just hear his despair! He felt that God had forsaken him. He felt that all was hopeless and he had nowhere to turn. I don’t know about you, but I have been there—probably not to the extent that Jeremiah was, because I have not yet faced anything that tragic.

But notice Jeremiah’s remedy for his despair and hopelessness.

“This I recall to mind, therefore have I hope. It is of the LORD’s mercies that we are not consumed, because his compassions fail not. They are new every morning: great is thy faithfulness.”Lamentations 3:21-23

First, Jeremiah remembered the mercy and faithfulness of God. He recalled it to mind. He reminded himself about it and purposefully thought on it.

When we are going through despair and hopelessness, the devil does not want us to remember God. He will cause those thoughts to go far away from our mind. That is why we must purposefully and carefully bring them back to mind. We must meditate on our God and His goodness to us.

Second, Jeremiah did some strong self-talk, reminding himself of what he needed to be thinking about:

“The LORD is my portion, saith my soul; therefore will I hope in him. The LORD is good unto them that wait for him, to the soul that seeketh him. It is good that a man should both hope and quietly wait for the salvation of the LORD.” Jeremiah 3:24-26

It is easy in the midst of despair to let your mind go completely bonkers, rushing after this scenario and that problem. The antidote for that? Get back to the Word of God. Anchor yourself in God’s Word and His truth. Hope in the Lord, seek Him, and quietly wait for His salvation.

When I find myself troubled and anxious, worrying about what will happen, it is a reminder that I am not thinking about the right things (Philippians 4:8) I need to get my mind focused back on the Lord and His Word. I find that the Psalms are especially helpful to me during times like that. David wrote honestly about what he was facing and how the Lord helped him through those times. That is encouraging to me.

So if you find yourself listening to CNN and all the fake news out there and constantly in a turmoil, wondering what will happen tomorrow—STOP! Focus instead on the Lord and His Word. Your days will be much more peaceful!

Remember that God is still on the throne, and He has everything under His control. We will see some rocky days ahead, but we can trust Him to see us through. He still loves us and He still has a plan for our lives. Get alone with HIM, trust in Him, and He will direct your steps. He is faithful!