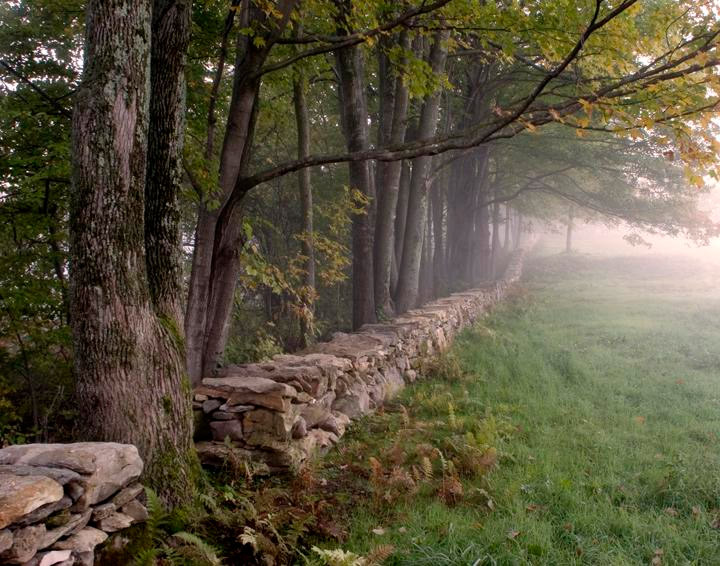 I’ve been reading in Leviticus lately, my mind nearly numb with the requirements for sacrifices and offerings. Every sentence, every command like a wall, preventing what I would term as freedom. I imagined wide open spaces instead, my mind rebelling a touch against the thought of having to remember all of the regulations that the children of Israel would have had to remember.

I wondered what the equivalent would be in my own life. What did God require of me? What offering in my life would be of a sweet savor to my God? And why did I naturally rebel against the walls of His requirements? Is it too much for Him to ask for the best of me? To ask for my obedience and submission to these walls?
These thoughts chased around in my mind as I drove home from a Christmas party a couple of weeks ago. It was midnight, and there was very little traffic, a dark and cold night of December. I was very near my home, and I saw someone step out into the road, waving their arms, flagging me down. I saw it was a woman and that she was standing in front of a car.

I pulled over, even as I imagined scenarios where I was taken in by the old my-car-is-broken-down-can-you-help-me?? trick. I cracked my window, and she leaned in close. A whiff of something sharp and unpleasant reached my nose, cigarette smoke mixed with the unmistakable tang of cheap alcohol.

“Do you have a tire jack?” She slurred, and I debated for a moment.

“I might.” I answered finally, committing my soul to the Lord and opening my door. If I perish, I perish.

I walked around to my trunk and opened it, searching underneath the flap in the floor of my trunk for a jack. I noticed another woman standing at the back of their car, amidst piles of junk they had pulled out of their own trunk, which was still open.

“I don’t have a jack.” I regretfully admitted as I closed my trunk.

The lady beside me cursed. “We will have to call Pappy.” she called to the younger girl, as if it was the very last thing either of them wanted to do. “Do you have a phone?” she abruptly addressed me, as the other girl stumbled around to the driver’s side of her car and got in, leaving the door open and a foot on the asphalt of the road.

“I do.” I admitted, getting it and reluctantly surrendering it to the lady who tried to open it. I felt silly when she looked at me blankly after a few tries at unlocking it. Right. I’ll unlock that for you. I didn’t have to be drunk to be slow, apparently. At least she had an excuse.

When I handed the unlocked phone back to her, she started dialing, but her fingers slipped and she cursed again, handing the phone back.

“Could you dial it for me?” she asked, not very nicely. As she leaned against my car, her coat fell open, and I noticed with shock that she was very pregnant.

I felt deeply sad, thinking of the damage that might be done and the future of that little one.

She dictated a number to me, and I put it on speaker. After a few rings, a sleepy woman answered, her voice hoarse from sleep and I guessed smoking.

“Mammy,” the woman leaned over my phone, “Give the phone to Pappy.”

“What? Why?” the voice on the phone didn’t sound pleased. “Just give it to him, Mammy.” the lady beside me rolled her eyes, her voice sarcastic and sharp.

“Why?” Mammy demanded, her own voice hardening.

“JUST GET PAPPY,” the lady with me yelled with a curse at the end.

I felt deeply uncomfortable. In a moment, a man’s voice came on. “What?” Pappy asked without emotion.

“We have a flat tire on Lyons Road and no jack, Pappy, we need help.” The woman’s voice changed into a wheedling whine, and I recoiled from the sound.

“No,” Pappy answered flatly. “I’m not leaving my house to come help you.”

Listening to the exchange, I knew I would have to call my dad. I felt a surge of thankfulness at the thought of my own father, who would never leave me stranded on the side of the road. I took the phone from her shaking hand.

“Thank you so much for your time, and we will take it from here, good night!” I spoke into the phone and heard his confused answer as I said goodbye.

I called my dad, and when I heard his voice, I felt deep relief. “Hey, Dad,” I spoke as the woman listened.

“I’m with two ladies that have a flat tire and need a jack to change it; do you have a jack there at that house?” I knew he did, and when he answered in the affirmative, I asked if he would come. I could hear him getting out of bed and walking to his closet as we spoke. He asked for a few details, and we said goodbye.

“Thank you,” the lady said, her eyes looking dully into mine. “Of course.” I answered gently, feeling more and more sad as the night progressed. She walked towards the trunk and tried to pull more out, then changed her mind and started shoving it all in deeper. When both actions proved to be more effort than she could handle in her inebriated state, she cursed and started to walk towards her companion, not paying any attention to the debris scattered on the road.

She tripped and not able to catch herself, fell hard on the asphalt. I felt my chest constrict with worry for her and her baby. I leapt out of my car and was by her side in an instant, helping her up. She had some scratches on her palms, but other than that didn’t seem harmed. I looked at what she had tripped over.

It was a tire jack.

“Oh.” She looked at it, and the girl sitting in the driver's seat of the car came to where we were both standing. It was the first time I had seen her by the light of the street lamp, and I realized that she was very young indeed and beautiful. Her eyes were more alert than her older friend’s, but they were wide and lost. I felt deeply that all of this should not be.

“This is the tire that is flat,” I heard the older lady call, and I went to the passenger side wheel to see what she meant.

It looked like the rubber had been ripped off the tire and lay in a flap over-top the rim, obscuring the tire. I reached forward and touched the rubber and was surprised to realize it wasn’t rubber at all, it was plastic. I tugged on it, and it slipped with a little resistance out of the wheel-well, revealing a perfectly whole tire.

What I held in my hands was the inner casing of the wheel-well. “What happened?” I felt very confused and looked back up the road, seeing in an instant what had happened. A tree had fallen and was off to the side, crushed… like a car had jumped the curb and hit it, rolling over the jagged pieces and leaving them in a trail to where this car sat.

“I don’t know, the tire just popped, and it made this horrible sound.” The lady spoke, her eyes following my gaze up to the fallen tree and then focusing confusedly back on my face. “We were just at some party…” she mumbled, “you try to have a good time…” she tried to laugh and suddenly lost her balance. I caught her and steadied her. Then I turned to her friend who was back in the driver’s seat, staring blankly through the windshield.

“Try to start the car…” I suggested, “drive a couple of feet and see if it is fine.” I was already dialing my dad to tell him not to bother coming. The car started and rolled forward without incident. “You’re amazing.” The lady looked at me with sheer wonder. No, I’m sober. I thought to myself.

“Do you need anything?” I asked her.

She shook her head and looked so forlorn.

She seemed to show the first glimmer of consciousness I’d seen that night, conscious of her state, and her eyes glistened with tears. She nodded, and I wrapped her in a hug. She held on and then pulled back, thanking me quietly.

Her younger friend had been cleaning up the debris from the trunk and was finished, looking utterly forlorn as well.

She nodded and walked right up, hugging me so tightly I could feel the zipper of her jacket through my coat. She was lost alright and in over her head with this older woman who was already in the passenger seat, head back and still mumbling that I was amazing.

I wanted to ask where her mother was. I wanted to take them both home and sober them up. I had no tracts and I knew they would not remember a word I said, so they wrote down my name and number and said goodbye.

When the night was over and I sat the next morning, picking back up in Deuteronomy, I read with new eyes and a realization that made me thank God for His protection.

“Thou shalt keep therefore His statutes, and His commandments, which I command thee this day, that it may go well with thee…”

My rebellion was gone; I was only thankful. He was ensuring that everything went well with me. He was keeping me, loving me, and protecting me from the end result of sin. A result I had seen first-hand the night before. I had felt the hopelessness and the despair rolling off of them. They had chased a “good time,” and there they were, alone, sin-sick, and with their consequences weighing on their bowed shoulders.

Theirs was the fate Satan doesn’t want me to see. He wants me to see the laughter and the parties, disdaining the rules and regulations of an unreasonable God. Oh, but God is good, God is kind and jealous of my heart. These were stones of love and faithful protection: these were kind walls.