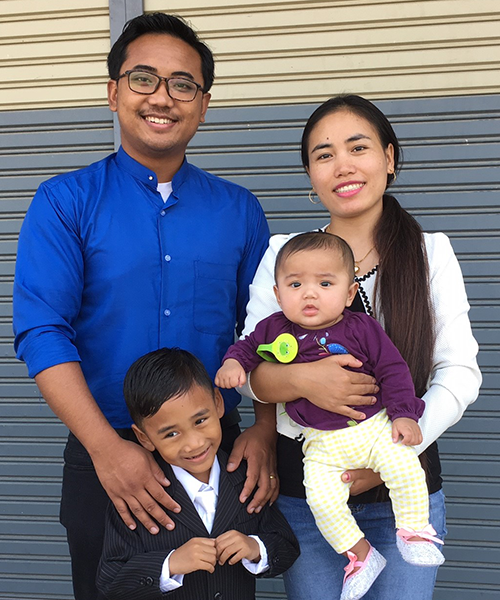 I would like to introduce you to a dear friend of mine by sharing her salvation testimony. I first met Ruth in 2016, and I’m so thankful God crossed our paths! May you be blessed as you read her testimony. As a side note Ruth’s husband, Heaven, translated this from Chin into English.

1. What religion were you raised with?

Hello everyone. My name is Mrs. Ruth Mang Hlawn Sung and I was born and raised in a Christian family. I was a good girl and did what was good in my sight. I obeyed my parents and went to the church and listened to my teachers, but I never really thought or worried about Heaven and Hell. I just thought that I would go to Heaven just because I was a good girl.

2. How did that help you understand the gospel and come to Christ or how did it hinder you from it?

It didn’t hinder me anything to understand the Gospel and come to Christ. In fact, it helped me know more about God and made me closer to God. I just didn’t hear the Gospel of Christ. I learned about creation, Noah, Abraham, and other Bible stories and even prayed to God. But I never heard about the need of repentance and salvation by grace through faith.

In Myanmar, we have a very important festival for Buddhism which is called Songkran festival (Water festival). It lasts three to four days. But around 85% of the population of Chin State are Christians and we were not allowed to go to their festival. Most churches will have a crusade for children during that festival time, mainly to prevent the Christian kids from going there. I used to go to one of those crusades which was held by Gospel Baptist Church. That caused me to be interested in hearing more about being born again.

3. What about the message of being born again helped you understand what you needed to do? What did you do to be born again? When were you born again?

In April 2000, I went to a children’s crusade held by Gospel Baptist Church during the water festival. I used to go to their crusades and had heard their teaching before, but that year was different for me. One day one of the teachers taught us about sin and she ended her teaching by saying this: “No one is perfect! Everyone is a sinner! For the wages of sin is death. Therefore everyone has to go to Hell.” That night I couldn’t sleep the whole night because I was thinking about what the teacher taught us. I knew that I was a sinner and imperfect. I knew that I would have to go to Hell if I die. I was so scared. The thing which troubled me even more was that everyone had to go to Hell. That thought kept me awake the whole night asking so many questions to myself and to God. Is there not any salvation? Why would God have to send everyone to Hell? And I couldn’t wait to hear what the teacher had to say the next day. Yes! The teacher taught us that if we repent our sins and believe that Jesus Christ is our Savior and Lord, we do not have to go to Hell for our sins because Jesus had paid for our sins and died in our place already. I received Jesus Christ in my heart and was born again on that day. I praise the Lord for what He had done for me on the cross and in my life. Not because of my righteousness but because of His righteousness and grace, I am now a child of God. I was born again when I was twelve, and I was baptized when I was seventeen.

4. What changes have you seen in your life since being born again? Which change has been the best one?

After being born again, there have been a lot of changes I can see in my life such as: prayer life, eager to learn about God, reading the Bible, caring about others, and trusting in the Lord. Among them, trusting the Lord is one of the things that I have learned the most throughout my life and I think it is one of the best changes in my life. I don’t mean that I am already perfect in every change that He has made in me, but He is very faithful in teaching me and guiding my ways in my daily life. I am very thankful to God and praise Him for what He has done in my life. May the glory and honor be unto Him and Him alone! I praise His holy name. Amen.