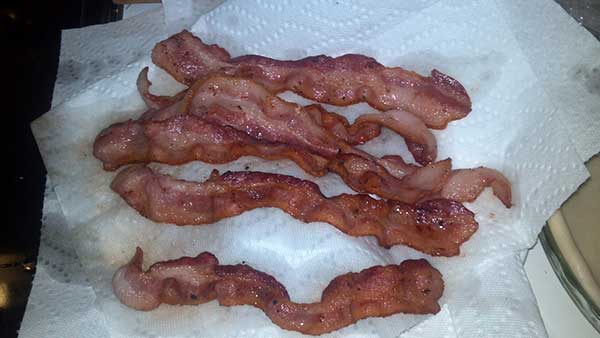 They were sitting around the dinner table, talking about the plans for family vacation...

“I want to purchase some of the cold food before we get to the house.” Dad said.

“Like bacon.” Mom added. I can see the light in her eyes. We talk about bacon the same way, she and I.

“Oh, I bet that’s reeeally expensive.” Anna commented. “You know, because they have no deer on the island.”

Everyone stared at her in silence. She stared back, as if they were the ones losing their minds.

“You know,” Anna stated defensively, “it’s an island, right? So no deer.”

“Anna,” Abby spoke up, holding back laughter, “where do you think bacon comes from?”

Anna’s eyes went to the ceiling and suddenly she crumpled, burying her head in her hands.

Gales of laughter from around the table. Anna rose, went into her bedroom and pulled the covers over her head. The rest of my family followed, to hear her under the blankets, laughing at herself.

I don’t think anyone likes making mistakes. Anna thought she was right. She didn’t see her mistake, but everyone else around her could see it very clearly.

When Abby told me the story, I laughed too, but I was struck by the parallel to myself. I tend to state things as fact, without any allowance for error. You know, because I’m right.

“The way of a fool is right in his own eyes: but he that hearkeneth unto counsel is wise.”Proverbs 12:15

A fool thinks he’s always right. So, when I am in the right, but none of my counselors seem to think so, what should I do? Trust in myself?

This happens all the time to me. I walk into a situation, my hair is wonderful, people are treating me well, I’m wearing high-heels, and before I know it, I fall on my face. He loves me enough to trip me.

On the opposite side, I have days where my heart is fixed on Him and not on my outward appearance. My day always ends on a lovely note, even if things aren’t perfect. He won’t let me fall if I’m resting in Him.

I know the difference but it is awfully easy for me to forget humility and be clothed in pride and self-worth instead.

It was a funny story and we aren’t letting her live it down too soon, but it also was a perfect reminder for me. Am I relying on God’s counsel or my own? Am I speaking and walking in self-confident pride or am I clothing myself in gentle and sweet humility?

Thanks for reading! Have a lovely day!