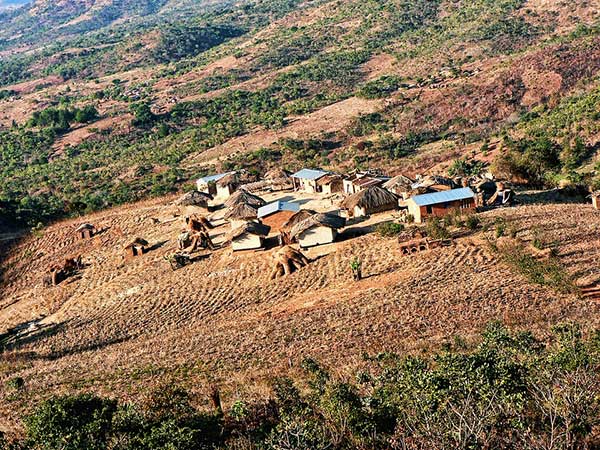 I just wanted to give you a quick update on our trip to Malawi. Thank you so much for all your prayers for us and for our trip. The Lord answered in a mighty way!

I praise the Lord that I was able to go with my husband on this trip. Though it was difficult, it was a huge blessing and a trip that I will never forget. The Lord taught me many things. There is no way I can share everything with you, but I wanted to hit a few highlights.

I have much to be thankful for!

The area we were in was what would be considered undeveloped. The first few days we were in the city of Blantyre, the second largest city in Malawi. Though it is a fairly large city, there are not many of what we would consider modern things found there. I only saw one “mall” area with a fairly modern grocery store. The rest of the shops were little tuck shops and markets here and there around the city. The guest house we were staying at in town did not have a washing machine, so every day they washed the sheets and towels by hand. They did have running water and indoor plumbing.

The building they had rented for the conference was a “church” that was in one of the mountain villages around the town. We drove part way up the mountain on a dirt “road” and then walked the rest of the way up to the building, which was almost at the top of the mountain.

Like many villages here in Africa, the people are very poor and have very little. Their houses are literally built on the side of the mountain and they have no running water or indoor plumbing. The community well is located about halfway up the mountain. So any water you use must be carried by bucket either up or down the steep hill to your house. Electricity is available in the area, but most of the houses did not have electricity because the people are too poor. So all cooking is done on an open fire.

On Friday-Sunday we were in an even more remote area. We drove about an hour out of Blantyre on a paved road, then we turned off onto a dirt “road” for the last 70 km. Think of the worst road you have ever been on and then multiply that by 10 times and you might come close! It took us 4 hours to travel those 70 km. It was like driving on a washboard!

The houses in the villages are made from mud bricks. They mix dirt and water, put it in a mold to harden, then out in the sun to dry. Then they bake them in a brick oven to make them hard. Because there is no cement in them, eventually they crumble from age or soak up too much water and crumble. For a roof, they make a frame of tree branches and then put long grass on top. As you can imagine, that doesn’t keep out the rain!

Motorbikes and bicycles are the main form of transportation. And of course, walking! There are a few kombies (taxis) that drive back and forth between there and Blantyre. But once the rainy season starts in October, the road will be unpassable to vehicles for several months.

All along the way were little villages with a few houses here and there, a market area with tuck shops, and children everywhere! We caused quite a stir everywhere we went, as the children would see us. It was evident that they don’t see many white faces!! If we would smile at them and wave or speak to them, they would get so excited and run alongside the car. They were all dirty, dressed in ragged clothes and no shoes.

These villages also had a community well where people went to draw water. The ladies washed their clothes down at the rivers and streams that run through the area. They are also used for bathing. Electricity is available in the area, but most people are too poor to connect to it.

We drove all the way to the Mozambique border. This is the area that Vincent, the man who was our translator, was from. My husband had been invited to preach in churches in some of the villages there. On Saturday we went to two of those villages. The dirt road was very narrow, more like a cow path. It is evident that not many vehicles travel there.

Many people came to the services that we held but I saw only one or two people with a Bible. They have a hunger to know God and have a form of religion, but it was evident as my husband spoke with the “pastors” that they do not understand the way of salvation. Yet, they invited us back to teach them the truth.

As I considered all these things, my heart was smitten. What do I have to complain about???? I have plenty of food to eat and nice clothes to wear. I have shoes for my feet, a bed to sleep in, running water and indoor plumbing. I have many Bibles and I know the truth of what God says. I have indeed been blessed!!

God hears and answers the prayers of His people

All along the way, it was evident that people were praying for us and God was answering those prayers. God gave us safety and protection all along the way. He kept us healthy and gave us physical strength. He allowed us to get through customs in Malawi without our bags getting checked, which saved us a huge customs fee. As the Word of God was preached, God opened the hearts of the people to receive the truth.

On the way to the villages on Friday, we had traveled about 20 km on the bumpy dirt road when the car suddenly died. Apparently one of the battery cables had come off due to all the shaking and bumping. The battery was dead, the engine wouldn’t start, and we were in the middle of nowhere! What were we going to do??? So we sent a quick prayer heavenward for God’s help.

You won’t believe how God answered our prayer! About 10 minutes later a kombie/taxi full of people came along. The driver stopped to check on us. (Here in South Africa, they just drive right by!) His brother had actually been Vincent’s best friend in high school! He had tools and jumper cables in his kombie so he helped us get the battery cable reattached and the engine started again. He found that one of the bars that hold the battery in place had also lost a nut and bolt, which is why the cable had come off. So he told us where to go in the next village that would probably have what we needed to fix that.

We drove on to the next village and stopped. By the time we got there, the cable had come lose again and the battery was being drained of power again. But sure enough, there in the middle of nowhere, was a little shop that had just the size nut and bolt we needed to reattach the bar to hold the battery and the cable in place. The kombie driver saw us stopped with the hood to the vehicle up, so he stopped again to check on us. Isn’t God good?? He cares about even the little things, like a nut and bolt, at the exact place that we needed it!!

As we drove back on Sunday, it was evident that we were going to need some petrol for the vehicle so we could make it all the way back to Blantyre. Where do you find petrol out in a remote village where there are no petrol stations? So we began to pray. In the next small village we passed through, we could hear a large motor running. So we stopped to see what it was. It was a huge generator, which runs on petrol! We asked if they had some extra we could buy, and they graciously sold us 5 liters!!

I could go on and on with different specific answers to prayer. We just stood back in awe as we saw God’s hand all along the way. What an awesome God we serve!

What do we do now?

God has placed this opportunity in our laps. We did not seek it or look for it, but God has opened the door. There are now over 20 villages in Malawi and Mozambique that have congregations of people that want us to come and teach them the Word of God. We can’t just ignore them, especially after being there and seeing their hunger to know the truth. There are many obstacles to overcome and we don’t have the finances to carry out such a work, so we need much wisdom on how to proceed from here. Please continue praying for guidance and direction and wisdom from God on how to go forward.