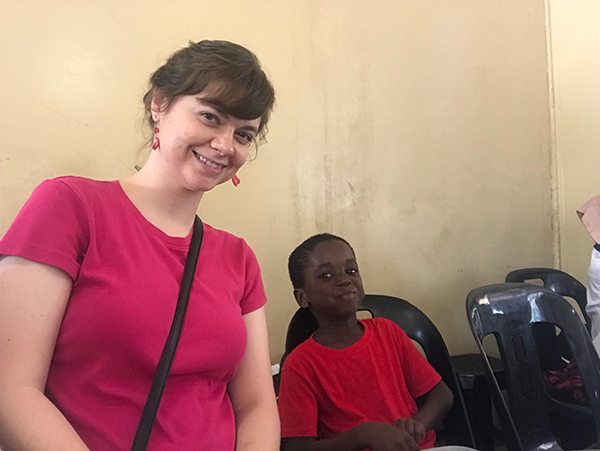 My very first “missions trip” has been an amazing experience! I honestly had no idea what to expect. My concept of Africa was all hearsay or just things you hear from tv news or look up on the internet, etc. Africa seems to have always been the last place that any person wants to be called to as a missionary. I’ve heard said that you should be careful you don’t say to God, “Lord, I’ll do anything You want me to do and go anywhere You want me to go……BUT Africa!” I truly had to deal with this in my own heart at one time in my life. (This was before I ever met Sam and before I ever knew I was going to be in Africa at all!) God was dealing with me about being willing to do His will whatever it may be and wherever it may take me. At the time, I had even thought of being called to Africa—not as an actual calling—but only on a level of willingness. Africa was a place that I was afraid to go to. The Lord’s will is what I wanted to do, though. So even though it seemed hard to tell God that I’d be willing to go there if He wanted me to, He helped me come to that point! And little did I know that I’d really be in Africa someday!

Africa is not as different as I thought it would be in some ways, but in other ways it is SO different! I’ve learned a few Setswana words such as “Dumela, Mma” or “Dumela, Rra,” which means “Hello/Greeting Ma’am/Sir.” We have used these Tswana words a lot in doing our outreach. We get some laughs when we just smile cluelessly when they reply in Tswana! (I had one lady tell me that the way I say “Dumela, Mma” sounds like I live here in Botswana. She said I had the right tone. That made me feel good!) I’ve also learned the Tswana handshake and the certain ways you are supposed hold your hands to give or receive something in a way of showing honor. I’ve messed these up several times! But it is a learning experience and the people here have been so nice about it. The Africans themselves don’t strictly adhere to these traditional ways all the time though, either. It helps me not feel so bad!

Things are slower in Africa. I had heard that several times before coming here to Botswana but didn’t fully understand it until living it myself! It sounded as if it’s a nice thing—and in some ways it is. But you realize things are slower in a different way when you come into town with only two things on your list to get done and it takes you all morning! The way they think and the way they do some things don’t make sense to us Americans! Being on time is not a priority here. We start our church service when we start. We end our church service when we end. And the time between start and end can last a looong time! Also, when somebody says they will meet you at this certain time you have to learn to accept that it could very well be 2 ½ hours later! It has been a bit of a struggle for me to get used to. God’s giving me a lesson in patience! Because I know that He knew how it was going to go and how long it was going to take. My struggle comes when I get my focus on how long it’s taking, how my back is hurting in this chair, how dark it’s getting outside, and all the mosquitoes that are buzzing around. My focus I know should be on what God is doing through the service in my heart and other’s hearts. It will help if I just choose to accept it the way it is and that it’s going to be that way just about every time! 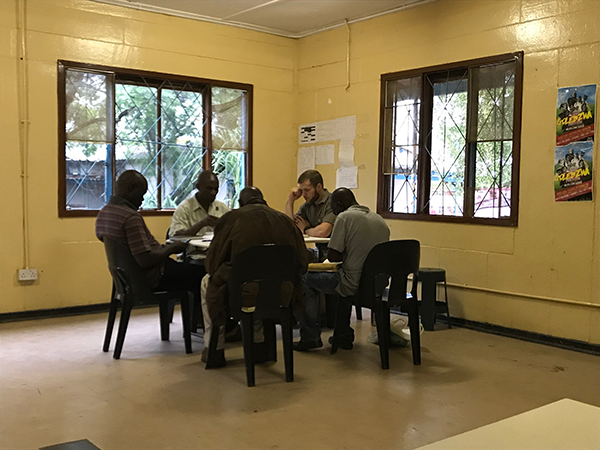 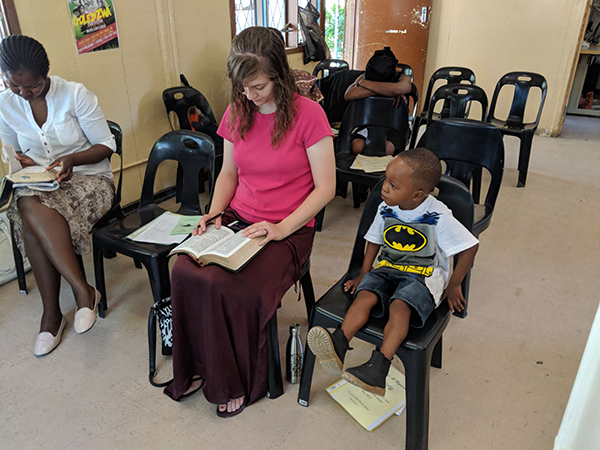 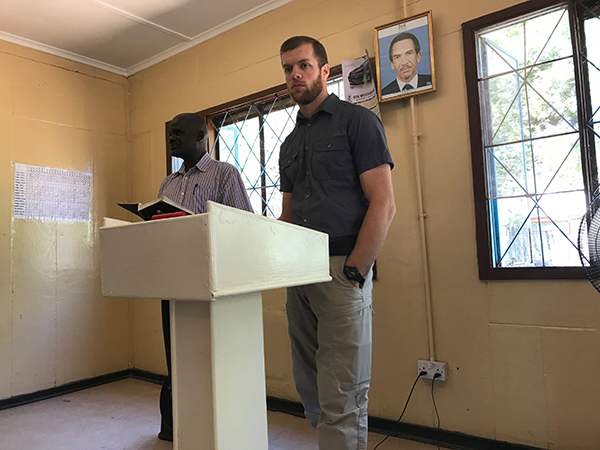 Sam and I had the opportunity to attend our very first African funeral. It was quite an experience! The funeral was held in Palaype, which is a two hour drive. The viewing of the body was from 5:30am-6:30am. So we had to leave the house at 3:30am! We picked up some of the church people here in Francistown on the way and arrived at the funeral around 6:00am. Once we greeted the family and did the viewing, then we went to the tent they had set up with a bunch of chairs under it. It was segregated, women on one side and men on the other. I was prepared to sit with the ladies, but I was told I could sit with Sam on the men’s side. (We were two out of three white people there.) Then for the next 2 ½ hours family and friends all had the opportunity to speak—all in Setswana. We couldn’t understand a thing, but the English words they would throw in amongst their Tswana. After this segment of the funeral was done, we all headed out to the grave site. We stood there maybe for another couple of hours while most of the men took turns shoveling the dirt over the coffin. Once the hole was filled, then they continued to pile the sandy dirt up in a mound which they framed in by big rocks. All the while this is going on, different ladies from the crowd of people would just pipe up and start singing a song and most of the crowd would follow along. All of it was sung in Tswana also. (I think we recognized one song that we had sung back at church in Francistown.) This went on and on until they were done. They put a shade over the mound of dirt. Sam said they believe that when a person dies the spirit comes back to sit at the grave and so the spirit needs shade. They completed the burial with a man praying in Tswana. Then we all went back to the house for the afternoon meal. They fed us Seswaa(pounded meat, basically it looks like shredded roast), potatoes and carrots, and Mealie Pap(ground corn or sorghum, basically like grits or rice). We got home around 2:30pm in the afternoon. It made for a long day, but we were glad we could be there for our sister in her grief, as well as get to have a memorable experience.

Some of the things that I’ve been able to do in helping in the ministry include folding testimony tracts, collating study books, and separating and stapling lessons and grading studies. There is a man here in Francistown who works at what they call “road works” that has been doing the studies and has gotten over 60 other people doing them as well! So, we get a big stack of studies from him to grade. Sometimes it’s taxing on your brain when you’re doing so many, but it’s an encouragement at how many people are going through the studies. We also have started offering the studies through WhatsApp and it’s taken off! We currently have around 15 people that are messaging Sam doing the studies. This has been an encouragement to see the results of our efforts coming in so fast! I know that it’s not good to completely base your progress or success on the results, those are ultimately up to God, but it is ok to take joy in getting to see it for yourself!

We printed up 700 different testimony tracts and went down to the taxi rink to pass them out. We were completely out within 20 minutes!! And we didn’t even reach everyone there! There is sooo many people and they want what you have to give. Some of them get so curious of what we’re giving someone else that they come over and ask for one for them and their friends. The receptivity of the people here is so different than the people in America. Having someone not take the tract is the exception to the rule. We have also been sitting down at the Civic Centre and just passing out the tracts to the people that walk by. Most of them take it and walk on, but some of them stop and ask us about what it is and where’s the church. Some have even come back after they’ve left to ask us!

I was asked to do a monthly Ladies Bible Study with the ladies here in Francistown back in USA before we came. But upon arriving, I found out the ladies in Palaype wanted to do one, too! So, I’ve been able to do it twice a month—one in Francistown and one in Palaype. The prospect of teaching adult ladies was scary! I’ve only ever taught 3-5-year-old children. It was a little terrifying at first to think about, but I knew it was going to be good for me. Upon suggestion, I’ve been using Beverly Hammett’s book she wrote on Women of the Bible. We as ladies are learning from the lives of ladies in God’s Word. It’s been helpful to me! I get to re-teach the lesson to the other group of ladies each month and sometimes you see and talk about some things you didn’t realize in the first go around!

It has been an honor and a privilege to get serve in the ministry here in Botswana! It has been a great opportunity for me to learn and grow in the Lord. I’ve also learned that living in a house with spiders, lizards, mosquitoes, and other bugs is not the end of the world!