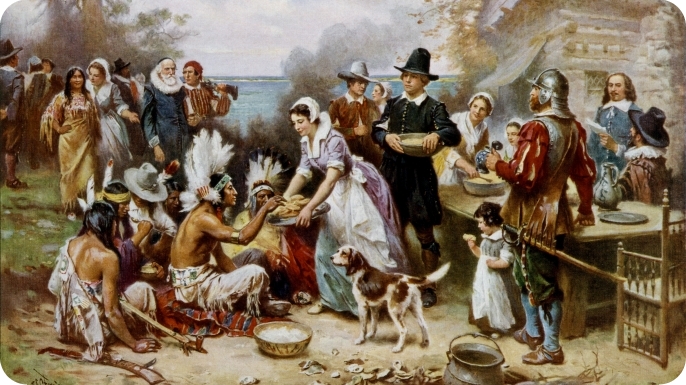 Mrs. Sarah Hale, a New England lady, felt Thanksgiving should be a day when everyone in the United States would celebrate together. In a book she wrote in 1827 she said, “Thanksgiving, like the Fourth of July, should be considered a national holiday and observed by all our people.”

Later, Mrs. Hale became the editor of a magazine called Godey’s Lady Book. She began to write articles about Thanksgiving. More than 150,000 women read what Sarah Hale had to say. She also wrote to important people asking them to help make Thanksgiving a national holiday. Finally, Mrs. Hale was invited to visit President Lincoln.

President Lincoln liked Mrs. Hale’s idea, and in 1863 he proclaimed the last Thursday in November to be Thanksgiving Day. Since that time, Thanksgiving has been celebrated every November. Ours is the first Thanksgiving in the world to be a legal, public, national holiday.

It is time to be thankful

As we gather together

In the presence of God, to restore

The customs of early Thanksgiving,

Fashioned by the Pilgrims before.

It is time to be thankful

For the fish in the stream

For the friends who have passed in review

Let us give thanks for the children at play . . .

For each morning born anew.

Yes, it is time to be thankful

For our picturesque church where we pray

That the air we breathe be kindled with love

Of God on Thanksgiving Day.