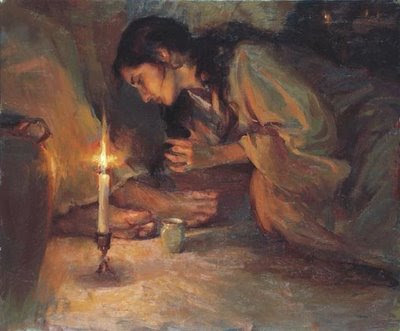 The air was a bit close in the room where they all sat, stuffed around a low table, relaxing as the meal came to a close. The candlelight flickered off the walls of the little abode, and the conversation has dropped to a low murmur. The door hesitatingly creaked open, and a small woman slipped in, carrying a vessel in her hands. Eyes followed her movement across the room, past the men, and to the head of the table. She was intruding in a man’s world, this small woman with her small box.

They all knew who she was, Mary of Bethany. She sought for Jesus Christ now, softly kneeling at His feet and opening her precious gift. She stood and lifted out a bottle of ointment, precious and expensive. This was no doubt her dowry, her only great possession which served a two-fold purpose. This dowry would be an enticement for a man to marry her, as he would receive this expensive gift on the consummation of their marriage. If perchance she did not marry, this dowry would sustain her in the years to come.

She paused a moment and studied it in her hands. It represented everything that she was – her family background, her past, her future, all her hopes and dreams. She looked deep into the amber-colored liquid, thinking of all that was wrapped up inside of it. Then with a quick breath and a steady hand, she poured the liquid over Jesus’ head, crying as she did.

All her hopes and dreams were spilled out in love of her Savior. It was in preparation of His death that she did that, although she did not know it at the time. Absolutely everything that she had that day was poured out over His head and eventually left on the floor. The room filled with the fragrance, and there was no mistake in any person’s mind exactly Who she loved and served.

She didn’t stop there. She stooped to the ground as the oil ran all the way down and started to pool on the floor. With a flick, her hair was released from its ensnarement and cascaded past her waist. She pulled it forward and began to wipe Jesus’ feet with her hair, pouring out tears of devotion at the same time.

Most were stunned by this flagrant outpouring of love. Some approved with nods of encouragement, but there were a few furrowed brows as well. One man in particular was outraged. “This oil could have been sold and the money given to the poor!” he declared. While it may have seemed like he was merely looking for the best investment, we know that he was only looking out for what he could get from this situation. It was evident that he did not realize the beauty of worship through sacrifice.

No, sacrifice isn’t a dirty word. Sacrifice isn’t just something you do for someone else. Sacrifice is, ‘anything you give up in order to gain something else.’ In Bible days, people made sacrifices to the gods they served in order to obtain favor with those gods. People who served Jehovah God were required to make their sacrifices, in order to fulfill His commands, so that God would be pleased with their disobedience. Those of course were physical animal sacrifices. Today, people make other sorts of sacrifices. For instance, a person might sacrifice some time spent at their leisure, in order to gain some time spent with a friends. Every time you go to the store, you sacrifice some hard-earned money in exchange for something you would like to gain, whether clothing or shoes, groceries, gas, or anything else you can buy with money.

If a person doesn’t care about the gain, they won’t be willing to make the sacrifice. People in the Bible who didn’t believe in the god Baal and could care less what he thought about them were not going to go to any trouble to please him. They wouldn’t make sacrifices of their herds to keep him appeased. People today who don’t care about baseball aren’t going to sacrifice their money to pay for tickets to the World Series. Before you can make a sacrifice, you have to be willing to get the gain. And not just get it, but sacrifice for it.

If you want to have a vibrant, personal relationship with God, you have to be willing to gain that. It won’t come free to you. You will have to sacrifice something. That sacrifice must be weighed out. Too often, modern girls say they want a relationship with God, but when they realize how much it will cost them, they stop short. They weigh the gain versus the sacrifice, and it is too much to pay. Rather than admit this, they just complain about it being so hard to be a Christian in today’s world.

Being a Christian in today’s world isn’t easy, I can tell you that, but the hardest part about Christianity in modern-day America is dealing with complacency of other Christians! If you decide to pursue a deep relationship with God, you will get the most flak from other Christians who should be encouraging you!

Mary stood, her eyes blinded by the tears still pouring out. She had given Him everything – the only thing in life that she held in any value, the only thing in life that was all hers – she had given it away. She could hear those in the crowd snickering or muttering, but it really didn’t bother her. The only opinion that mattered was His. What would He say? What would He do now? For a moment, she felt the cold hand of fear grip her heart that maybe He would be embarrassed and tell her to go away. She lifted her eyes and saw that He was looking right into hers, tears streaming down His face too.

“Let her alone,” He said, “Why trouble ye her? She hath wrought a good work on me… She hath done what she could… Verily I say unto you, wheresoever this gospel shall be preached throughout the whole world, this also that she hath done shall be spoken of for a memorial of her.”

How do you think Mary felt after Jesus spoke those words to the whole crowd? In a society where women were often viewed as property, Jesus loved her, recognized her sacrifice, rebuked her scoffers, and prophesied that her sacrifice would be an aid to the Gospel.

It can be the same for you.