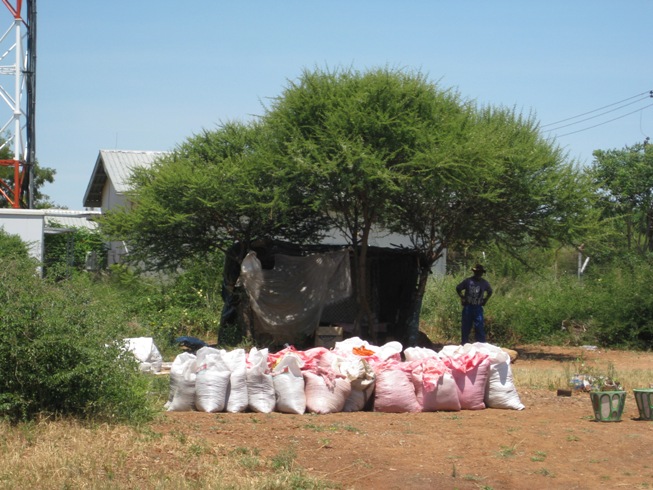 Greetings from Botswana and Happy New Year to each of you—oops, I guess I am a month late already. It is hard to believe that January has already flown by! I hope you had a good holiday season and are now busy serving the Lord in this New Year. When I was a kid, I could never imagine living past the year 2000 and here we are at 2012 already. For those of you who are wondering if the world is going to end this year because the Mayan calendar predicts it, just put your mind at ease. I can say with assurance that we have at least 7 more years until the world ends—and that is only if the Lord comes back in the rapture this year and takes all those who are saved home to heaven. So just keep your eyes on the Lord and stay busy doing what He has called you to do!

We have been having quite a few power outages here lately. In fact, there was one stretch of 10 days when the power was off every day—anywhere from 2 hours to 9 hours during the day. Of course, we have no warning when it is going to go off. Generally it will be just as we are getting ready to cook lunch or have a cake baking in the oven. And the weather has been clear and sunny (which translates to HOT), so we knew the power wasn’t going out because of storms. We learned survival mode very quickly! When the power would come on, we would all go plug in anything electronic (our laptops, phones, kindles, etc.) and get them charged to capacity because you never knew when it was going to go off again and how long it was going to be off. Then we would hurry and figure out what we could cook and get it done quickly before the power went off again. It was quite amusing! We were also very thankful that we have a gas grill for those times when the power was off all day and we didn’t have a chance to cook anything.

After some online research, we found the answer to why the power kept going off. Apparently they built a new power plant which was completed in October 2011. This power plant was to handle the increased demands for power here in Botswana, especially during the hot summer months. Well, it seems that this new power plant was having severe problems. The equipment was not working properly, the news article said. So the power was being turned off so they could work on the equipment. Thankfully, our power has only been off one day this past week, so we are hoping that means they have it almost fixed. 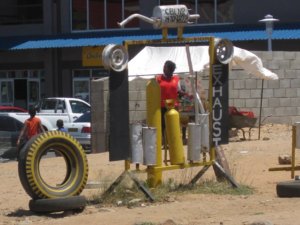 I started a Bible study this week with a lady named Ottilia. She works in a tuck shop across from the market where Laison works. He was talking to her last week and she said she was interested in studying the Bible. So he took me and introduced me to her. Please pray for her to understand the Word of God and her need of salvation.

The tuck shops are very interesting. I am going to include a few pictures of them so you can understand what I am talking about. They are just little shops that people set up everywhere to sell things. They might be just a table under a shade tree, or a little shelter constructed out of black plastic, or just a blanket laid out on the sidewalk with maybe an umbrella to shelter them from the sun. You can buy just about anything at a tuck shop: candy, snacks, cookies, fruit, vegetables (they will even roast an ear of corn for you and slather it in butter), clothes, shoes, belts, billfolds, chicken manure, curios, blankets, or beans. And I am sure that is not an exhaustive list. You can also get your hair cut (if you don’t mind the danger of getting AIDS), have your flat tire fixed or your muffler welded, get your car washed, or buy airtime for your phone. I am not sure why they call them tuck shops—I guess because you can just tuck them in anywhere.

The main streets downtown are lined with these shops—which makes it very crowded and hard to walk down the sidewalks. Down at the taxi rank, there are also very many of them. There they sell to the people who come into town on the buses and kombies. A lot of the people who set up these shops are from other countries and don’t have working papers to work legally here in Botswana, so that is how they earn a living.

Are things cheaper to buy at these shops? No, not generally. I thought maybe the fruits and vegetables would be cheaper. But I found out that they buy their produce from the same trucks that supply the grocery stores, so prices are generally the same or even higher than in the store. And they get most of their other items to sell from the Chinese shops in town (which is all cheap imported stuff). Tuck shops—a very interesting part of life here in Botswana. 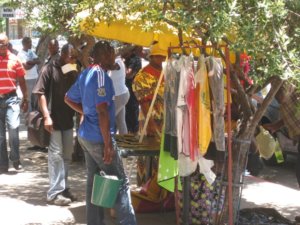 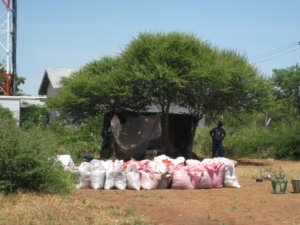 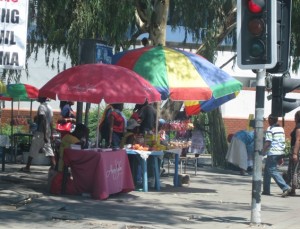 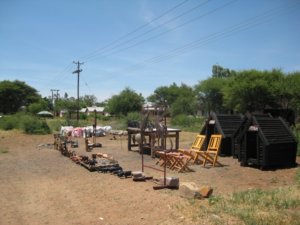 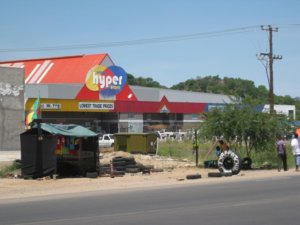