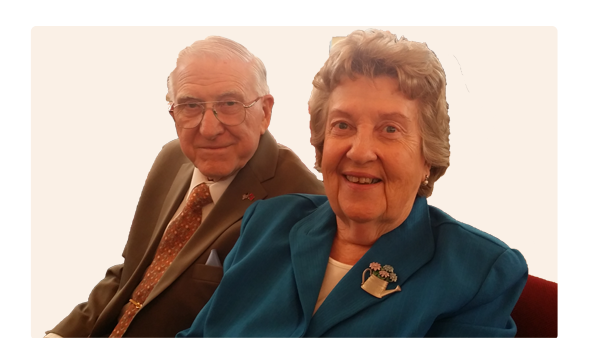 Mrs. Perie Combee was content with her life, living in her own house on a quiet country lane in Coopersburg. Her house was filled with pleasant memories and pictures of loved ones, all the way down to her great-grandchildren (she has nine.) Mrs. Combee appreciated the faithfulness of her heavenly Father; in her own words, “How faithful the Lord has been to me, not that we had so much but…the Lord has always provided… the Lord just led us all the way.”

But one day, her heavenly Father had a surprise for her, in the form of Al Smith, a dear fellow from her church. She had known him and his late wife for some time, spending time around services conversing with them. After his wife passed away, Perie continued to talk to him every Sunday over the next year or so. In hindsight, she realizes the way he would take her hands and say, “such cold hands!” was his little way of communicating his like for her.

Finally the day came when he asked her out for the first time. Her friend Donna accompanied them. Later, a church family invited each of them over for dinner, unbeknownst to the other. Having liked Al right away, Perie was ready when he popped the question in early 2016. “It is so crazy!” she commented. “I can’t believe how I feel about this man! It had to be the Lord.”

Naturally, Perie’s family was surprised by the event but also very happy for her. All they desired was to be married after a church service “and that’s it;” it was supposed to be a “little affair.” But when some of the church ladies got wind of the coming nuptials, they planned an evening of felicity for the dear couple. Perie has her dress for the occasion, so she is ready to marry her man.

Perie and Al are a true testament to the goodness of the Lord. They both exude such happiness and love for each other that those around them cannot help but rejoice with them in what God has done. Who can tell what His future plan is for them, but they will walk through it side by side in the sweet love of newlyweds.

Laura started attending Lehigh Valley Baptist Church as a child when her family moved to the area. For years, her primary passion was in nursing and furthering her education. In the midst of pursuing a medical degree, God changed her plans and she married Jonathan Snow (read their story here). Now, she has discovered a special fulfillment from being a wife, and Lord-willing, a mother one day! Truly, God’s ways are always for our good and for His glory.