Greetings from sunny and hot Botswana! You would think that temperatures would be cooling down a bit, since we are now officially in the Fall season. But the last time I looked, it was over 90 degrees outside today. We did have some cooler weather last week, which was very enjoyable, but which also caused problems all its own (more about that in a minute).

Things have been very busy around here since we got back from our trip to America. We have made a couple trips south to Gaborone dealing with legal issues. We also made a trip to South Africa to see George and Kristin and the grandkids, and to help them get unpacked and settled in their new house. And we have been busy around here with the work. Here are some of the interesting happenings from the past couple months:

The cooler weather a couple weeks ago brought some interesting creatures into our house. One was a big hairy spider which wanted to crawl in 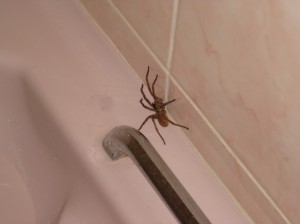 the bathtub with me. Needless to say, I didn’t stick around to chat with him! I am not exactly sure how he got in the bathroom. He was at least 4 inches long and very ugly. My husband rescued me from harm by smashing him with my shoe.

The second creature was found by my husband. He has a large mug with a lid that he keeps water in to drink. He usually leaves it sitting on the kitchen cabinet. When he took the lid off one morning to fill his mug with fresh water, he found a huge cockroach, 5 inches long and 2 inches wide, INSIDE the mug. We are not quite sure how he got in because the lid was on tight and the hole in the top is not that big. It must have been a tight squeeze on the way in, and then no way out because he couldn’t get turned around. Needless to say, that mug got a good soaking with bleach water and then a good scrubbing with hot soapy water. (Sorry I didn’t get a picture of the nasty cockroach before he was disposed of.)

One day this week we got a call from our neighbor across the road. Her husband was not home, and she said there was a big snake in her yard. She wanted my husband to come over and kill the snake! She kept saying, “It is a big one, a very big snake.” Well, you know how much my husband hates snakes—but he was brave and took his shovel to go kill the snake. He carefully poked around in the weeds but he never found the snake. But I have heard of several people who have killed cobras in their yards and gardens over the past few weeks. Apparently the snakes are trying to find things to eat so they can fatten up before they go into hibernation. Thankfully we have not seen any in our yard!

The power outages have been numerous in the past couple months. We found out that the new power plant, which is not even completed yet, has been having problems, so they have been shutting down the units to work on them. We never have any warning to know when it is going off or how long it will be off. Makes life very interesting!

It also makes us thankful for the new KFC which opened up on our side of town. They had been working on it for 2 years, and we called it the “mystery building” because there was no sign up as to what it was going to be. They would work on it for a few weeks, and then it would sit for long periods of time with no one working on it. So we all made guesses as to what it would be when it was finally finished. When we left for America, it was still sitting empty and unfinished. So it was a pleasant surprise when we got back and saw it was a KFC and it was open. When the power is off and I can’t cook lunch or supper, it is a convenient place to go.

We started a language class in conversational Setswana. It is a small class that meets twice a week for ten weeks and so far has been very interesting. The first couple weeks were not too hard, but the classes this past week were a bit overwhelming. I think my brain is too old for this! But we did learn one thing that has helped a lot. Setswana has no specific word to distinguish between he and she. They are both the same word. It was an “ah, ha” moment for us, and helped to explain something that has confused us for a long time.

When speaking in conversation, they will often switch between the two pronouns he and she when referring to the same person. For example, when speaking of their mother, they might say, “My mother, she went to town. He bought some eggs at the store.” Our American brain says, “Wait a minute. I thought you were talking about your mother.” Well, they were still speaking of their mother. They just changed pronouns on you in the middle of the conversation. Believe me, it can be quite confusing and makes a conversation very hard to follow. We always thought they were just getting confused because they were speaking in English. But to them it makes sense—just not to us! So we have learned to ask lots of questions to clarify just exactly who they are speaking about.

There is only one main highway that runs north and south in Botswana. From here south it goes to Gaborone. It is a two-lane road all the way until you get about 40 km from Gaborone, but a fairly decent road—except for the first 30 km between here and a village called Tonota. That part of the road is horrible with big potholes and hardly any shoulder. And that also happens to be one of the busiest parts of the road.

So we had mixed emotions when we got back and saw the sign that said they were going to be working on that part of the road. We were happy because it needs to be fixed. But we were sad, because we know what a mess it is going to be while they work on it. That is the only road to Gaborone, so when we have to make that trip, we will just have to endure the mess. It is not a very long stretch, but it will probably take them at least two years to get it completed. So pray for us, because we still have many trips to make to Gaborone.

We are enjoying having the Castner family here to fellowship with and to share the work. We especially enjoyed celebrating all their January/February birthdays with them! Yum, yum, lots of good food!

The last picture is of some mango freezer jam that I made this week.  It is something I have always wanted to try, so when they had mangoes on sale, I bought a bunch. Then I found a recipe online that I could use. It was super easy to make, and the finished product is very delicious. In fact, it is my husband’s new favorite jam, knocking his all-time favorite—strawberry jam—to second place. I was able to make two batches of the mango jam, so we shall see how long it lasts!

Love to all, Bev 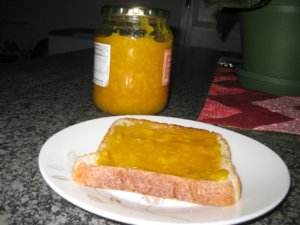