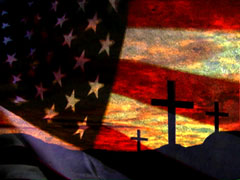 The Price of Freedom

The air was hot and humid, or sometimes very cold,
But the soldiers never hesitate to do as they are told;
They valiantly follow their leader, ready to give their all,
And they never hesitate though many soon will fall.

A father dares not to think of wife and babies far away,
A brother’s heart is cheered by a sister he knows will surely pray;
A son remembers mother and takes courage not to give in,
While another with no family fights just as hard to win.

For what reason would a mother give her sons to die?
Why would a soldier suffer so without a moan or sigh?
When pleasant doors and paths of ease entice
What victory is worth such a high price?

Quickly, one stands up from the ranks with a call,
The answer is repeated and hurrahed by all;
Freedom! For freedom each would gladly give their life,
For this reason alone they all entered the strife.

And so freedom for all in America was won,
Because of the brave soldiers and all they had done;
The great sacrifice that these men made,
Is a price that can never be fully repaid.

Like those early Americans under England’s rule
I was in bondage to sin, Satan’s ready tool;
For years, I longed in vain for someone to set me free
But in spite of all my struggle, no freedom I could see.

But if I had but known, Someone had fought for me,
Someone long ago, Who had died upon the tree;
He took my sin upon Him, and His life He freely gave,
His all was surrendered that this sinner, He might save.

When I finally came to Calvary and bowed upon my knee,
At once I realized the victory was already won for me;
When He chose to die so long ago, He willingly took my place,
And with this realization, the tears poured down my face.

Why would the Saviour die for me and give His all?
Why wait so long for this wretched sinner to call?
When pleasant doors and paths of ease in heaven entice,
Why would He pay for me such a high price?

Quickly I stand at the foot of the cross to say,
With a smile of joy that chases tears away;
Freedom! For freedom He gladly gave His life,
To grant me freedom from my inward strife!

The great sacrifice that my Lord made,
Is a price that never can be repaid;
The only payment that I can clearly see,
Is to never forget the price of freedom for me.