“Then the eyes of the blind shall be opened, and the ears of the deaf shall be unstopped. Then shall the lame man leap as an hart, and the tongue of the dumb sing: for in the wilderness shall waters break out, and streams in the desert.” (Isaiah 35:5-6)

These verses speak of the future glory of Israel, during the millennial reign of Jesus Christ. The phrase used at the end of verse 6, streams in the desert—also the title which I have chosen for these updates—is a powerful word picture. A desert is a barren wilderness, a place where water is very scarce. But a stream in the desert brings life. Along the stream will be trees, grass, and other forms of vegetation that normally would not be seen in the desert—and many different kinds of animals and birds.

The country of Botswana is mostly a desert. In fact, 70% of the country is covered by the Kalahari Desert. The other 30% is near desert and the climate is known as semi-arid. In this country, the rainfall is seasonal and unreliable. Right now we are in the rainy season, which technically runs from December to March. Some years, there will be lots of rain that will fall, and this produces a dramatic change. The barren wasteland comes to vibrant life and all the riverbeds fill up with water. But the rains soon stop, and gradually the streams will dry up. The grasses turn brown and die, and the other vegetation dies out.

The majority of the rivers and streams flow only during the four months of the rainy season. The rest of the year, the riverbeds are mostly dry. There is a river that runs through Francistown called the Tati River. Last year when we were here, there was no water in the riverbed. It was so dry that people could walk across it without any problem. We got a little bit of rain last year, and if several inches of rain fell at one time, there would be a small stream that would run for maybe a day or two then it would stop flowing again. This year, much more rain has fallen, and the riverbed has been full and running for several weeks now. Everywhere you drive in Botswana right now, you will see streams in the desert—riverbeds that are usually dry but now are running with water. Everywhere you look it is green because of all the rain.

Spiritually speaking, the country of Botswana is also a desert. There is a dearth of the true gospel of Jesus Christ that brings life to a thirsty soul. Just like in America, there are many false gospels that are being preached and many false prophets that claim to be speaking the truth but they are not. Witch doctors, medicine men, and ancestor worship are still very much a part of the life here. Our desire here is to see people saved so that churches can be started that will be like streams in the desert—rivers of water to bring life to a barren land.

We are starting to see small trickles, and it is exciting. My husband has been praying for 15 men to win, train, and disciple, so that they can in turn train others, and eventually some churches can be started. The Lord has brought those 15 men into his life. Some of these are men that we met last year; the others are ones that the Lord has brought into our life since we arrived in October. One man was walking by and heard our church service. He is from Zimbabwe and wants to preach the gospel here in Botswana. All of them have a desire and a hunger to know more of the Word of God. Please pray as my husband works with these men. 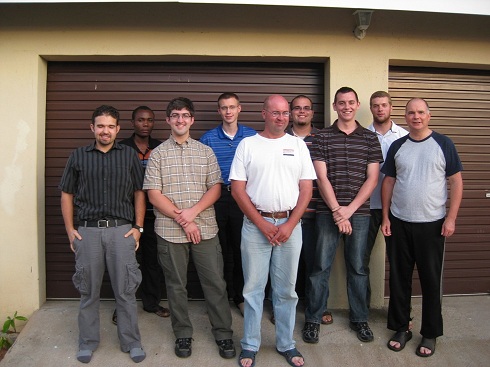 Our house is bursting at the seams right now with 7 extra men that are here for Missions Module #1. Six of these men are from America and one is from Zambia. It is interesting having ten laptop computers in one house—I am constantly tripping over cords. And the internet is slower than ever. Oh well, hopefully soon we can get our phone line in so we can get a better connection. Since we have our resident permits now, the application has been made—but it looks like it will be a couple months before the process is complete. This is Africa!

My husband is doing what he loves most—he gets to teach these men and share his vision with them. Classes start at 8:30 each morning and go to lunchtime. After lunch, there will be more teaching then the guys go into town to do Bible studies that they have set up with different interested people. Those who don’t have a study scheduled go out on the streets of town for a few hours, talking with people and looking for opportunities to present the gospel and offer Bible studies. Then they have some free time until supper. After supper, there will be more teaching, also book reports on missionary biographies, a segment from another book (right now they are listening to the life of Hudson Taylor), and a debriefing of all that happened during the day and the lessons learned.

Each of the men has already set up Bible studies with people—some of them have Bible studies going with several people. If these people get saved, they will be responsible to disciple them during the rest of the time they are here. What an opportunity for on-the-ground training! Pray for these men, that the Lord would use this time in their life to help them grow and that God would help them each to know His will for their life.

I am sure most of you have heard by now that my husband and I finally got our resident permits. It seemed like a long time to us—eight months total—but we have heard of missionaries in other countries that have waited for two years or more. We learned several lessons of patience, endurance, and waiting on God. I must say it was a big relief to drive back home, not having to think about the possibility of having to pack up and leave the country. After our visas were approved, we filed the paperwork for Sam and Rachel to get their visas. The lady in the office said it should only take a couple weeks for theirs to be approved.

Last week we showed a gospel film outside in our driveway. We handed out flyers, inviting those in our neighborhood to come. My husband is planning on showing films in several villages, and he wanted to test out the equipment here to make sure everything worked together. Our neighborhood is fairly small—basically three streets about three blocks long each. We actually had around 30 people that came. Some called and said they could not come, but wanted to know if we would show the film again another time. It was a good way to meet our neighbors and to let them know why we are here. Everyone left with a tract and a Bible study request card.

This week marks three months since we moved to Botswana. As I look back over those three months, it is quite amazing to think of all the Lord has done for us and the many doors He has opened. It is actually quite humbling to consider it all—and causes us to look with great anticipation towards the future. What a wonderful God we serve!