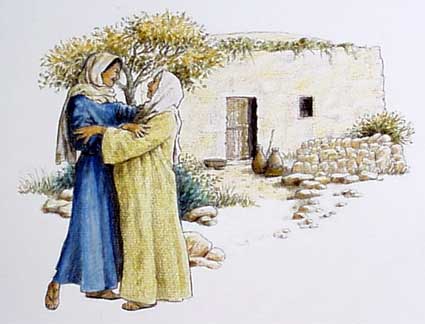 Do you have a favorite verse that depicts the Christmas season? I have one verse that has been coming to mind as we’ve been preparing for this December. It’s not very typically quoted as a Christmas verse, but it was the one that the Lord has been bringing back to my mind. Perhaps a deeper study would be in order!

Mary had a shocking blow to her life. With the words of the angel, she must have known that life would never again be the same. What reaction her parents would give, her future husband would give, her peers would give, she had no idea. Yet at the same time, she realized that she was blessed and honored to be chosen, and would become famous for bearing the Messiah. Yet all she said was, “Behold the handmaid of the Lord; be it unto me according to thy word.” And then the angel departed, and I wonder if Mary thought she had dreamt the whole thing. Until the realization that the words of the angel were indeed true, and the fallout began.

Somewhere in all of this drama (and I’m sure there were many dramatic moments!) Mary headed for the hills of Judah to visit her cousin, Elizabeth. She was experiencing a miraculous pregnancy of her own, and no doubt the two cousins had much to talk about and wonder along with each other. How interesting that this visit was not just one of commiseration or feminine flustering, but a time of great encouragement and – surprisingly enough – praise to the Lord!

When Mary entered the room where Elisabeth was, the babe in her womb (John the Baptist) leapt at the sound of Mary’s voice. Elisabeth was filled with the Holy Ghost and began blessing Mary for her belief, and prophesying a performance of all that God had said. Mary’s response is what has so captivated my attention. She had been encouraged by Elisabeth, an woman older than herself and one who may have had stronger faith. Mary’s faith was being stretched, and no doubt she at times thought that things would never work out. She was a normal woman just like you and I, and this change of life was disturbing, disruptive, and at times, discouraging. Elisabeth’s words encouraged her, lifted her up, and gave her the confidence that she could continue believing in God.

Mary’s immediate response was – My soul doth magnify the Lord, and my spirit hath rejoiced in God my Savior.

The verb “doth” indicates something that has happened in the past and is still happening now. It was not just at that moment that Mary magnified the Lord, she had been doing that all along. It also conveys a sense of determination. She was not hoping that she could magnify the Lord, but rather giving a definite action which she would continue to do.

To magnify something is to make it greater, or make it to appear greater. Mary could not make the Lord greater than He already was, but with her soul, she could see Him greater than she ever had before. We can never comprehend the greatness of God, and once your soul begins to magnify the Lord, you will never find out all of His greatness. Keep magnifying, on and on, and you will never discover the complete greatness of our God.

The soul speaks of one’s mind, will, and emotions. By Mary’s own testimony, she was discovering the greatness of God with her thoughts, her choices, and her feelings. These things follow each other in order – no doubt if she was following her feelings alone, the situation would have turned out completely different! Remember the determination she had? This was not something that was brought out in actions or words alone. She was not running around, shouting to everyone about how great God was. Just the very testament of the choices she made spoke of God’s greatness to and through her.

To be chosen as the earthly mother for the Messiah was a great honor and privilege, but we do not see Mary magnifying herself. Later she recognized that God “hath done to me great things.” Mary acknowledged a very important truth – everything we have in this life can all be attributed to God. Out of all women that have ever lived, she was certainly “blessed among women,” yet she herself privately and publicly declared that she was magnifying God for the things that happened in her life, good or bad.

What an example Mary gives us, just in this one little phrase. My soul doth magnify the Lord. Does yours?