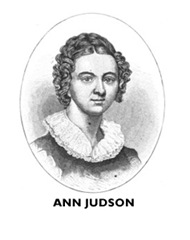 Ann Judson. Ever since I read a biography about her in high school, she has been my hero. The more I read about her and study her life, the more I like her! Her life wasn’t easy – not by any stretch – but she loved God, loved her husband, and did what was right.

I have a favorite quote – not just a favorite of her quotes, but a favorite of all quotes that I like. In fact, I have it memorized, just because I’ve read it and copied it so many times! I have it printed out and framed in my room. I have it written in my Bible. If I could live my life as successfully as Ann lived hers (by God’s definition of success, that is), I would be content.

There is a story behind these words that she wrote. A year or so previous to penning them, Ann had met a certain young man, whose name was Adoniram Judson. He was one of four young men who were being sent by the American Board as the first foreign missionaries from the United States. With her father as an prominent man in the Congregational church, these four young men were entertained in Ann’s home and served by Ann herself.

In 1811, Adoniram composed what could probably be considered the most extraordinary letter ever written to a father-in-law. I won’t quote it here, but he basically asked if Ann’s father could bear to give her hand in marriage, knowing he would never see his daughter again and she would most likely die in ridicule, persecution, and torment – but do it knowing that she was giving her life for a better cause. Amazingly (or perhaps wisely) enough, Ann’s father left the decision entirely up to her.

She was torn. Others around her called her a fool, telling her she must stay and not go with him. He was headed for Calcutta, with a hard voyage that would take at least four months. Once there, no one knew what would happen – how they would be received, how they would live, if they would be allowed to live.

But another side of her told her it was the right thing to do. Ever since her conversion at age 17, she had been building Godly habits in her life – she was an avid student of God’s Word, she loved to share the Gospel, she lived every moment of her life in a way that glorified God. For her, marrying Adoniram and being his helpmeet in whatever would come their way was the logical next step in the path God had shown her.

Ann says it best in these words which she penned the night she decided to accept his proposal:

“I am a creature of God, and He had an undoubted right to do with me as seemeth good in His sight. I rejoice that I am in His hands, that He is everywhere present and can protect me in one place as well as in another. He has my heart in His hands, and when I am called to face danger, to pass through scenes of terror and distress, He can inspire me with fortitude and enable me to trust in Him. Jesus is faithful, His promises are precious. Were it not for these considerations, I should with my present prospects sink down in despair…But whether I spend my days in India or America, I desire to spend them in the service of God, and be prepared to spend an eternity in His presence.  O Jesus, make me live to thee, and I desire no more .”

Beautiful, isn’t it? It is even more striking when you realize how much she lived out those very words.

On February 5, 1812, Adoniram and Ann Judson were pronounced man and wife, and the next day they set sail on a four-month voyage for Calcutta. She would never return home again. Life wasn’t easy for Ann, yet she always kept her love for God and her sweet spirit. Was it worth it all? I think that today, standing before the throne of God, she has no regrets that she lived her life the way that she did.