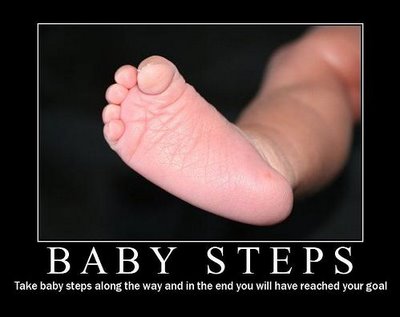 By little and little I will drive them out from before thee, until thou be increased, and inherit the land.
– Exodus 23:30 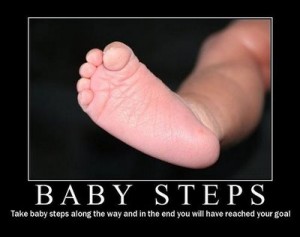 The children of Israel stood on the border of it.  The Promised Land.  Their Promised Land.  They place that they had longed to see for many years.  Not just a place to see- but to possess and enjoy!  A place in which to dwell and flourish!  Their hearts must have soared with expectation of all that the Lord was going to do as He “handed them” this new land!

And then the Lord attached the above verse to His promise.   “By little and little I will drive them out from before thee…”  By little and little…What?!  The prospect of many years of battles and conquests quite probably was a bit daunting to the Israelites.  While we can see that God’s timing and method made sense, I wouldn’t be surprised if there were many in their company that may have been a little overwhelmed with the task before them.

Sometimes, we too, may desire “large” victories and we often want them handed to us on a silver platter, don’t we?  Be honest!  Wouldn’t it be nice if motherhood were peppered with the “big” victories? A newborn sleeping through the night, a toddler potty-training, little ones doing chores independently, older children learning to read or develop good manners: these“big” successes are rarely gained overnight.  They require patience, tenacity, consistency and are often accompanied by a lot of setbacks.

Victories in child-rearing are more like the little-by-little approach that God describes in Exodus 23.  There is small victory here and another barely-detectable one over there.  A toddler’s first teetering step followed by many, many falls.  A little glimmer of obedience preceding much “testing” of the rules.  Little triumphs sprinkled along the way, nothing too exciting.  It’s a slow and hopefully steady uphill climb!

What can we do as moms to resist being daunted by the monumental tasks and discouraged by the lack of victories?  I think we need to remember that life is made up of the “little things.”  You’ve heard it said, “Don’t sweat the small stuff.  Because it’s all small stuff.”  And you know it’s true!  Zechariah 4:10 asks,“For who hath despised the day of small things?” Small things are to be celebrated!  Throw a party, bake some cookies, clap your hands, thank the Lord when:

Rejoice!  Celebrate! Even if the “little” victory seems rare or short-lived.

Beyond recognizing and rejoicing in the little things, I think we need to remember that our times are in His hands. (Psalm 31:15)  He controls the eventual outcome of ALL of our circumstances in this life!  It is my choice to bless Him at all times. (Psalm 34:1) Whether I think things are going well or not, whether I’m pleased with the victories or lack thereof, I am to simply trust and obey!

You can do it, dear mother!  With the Lord’s strength, you can fight the giant of sleepless nights, conquer the days of potty-training, and slay the enemy of endless phonics lessons!  Celebrate the small victories and keep your eyes on the One who holds your future!

Abigail strives to be a joyful wife to Scott and mother to their five blessings – Lily, Joseph, Grace, Emma, and Samuel. She enjoys homemaking, organizing, homeschooling, and bargain shopping.