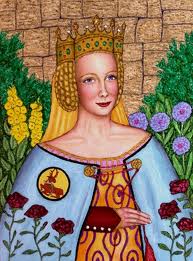 With a quick look around and a sharp intake of breath, Joan slipped into the shadows of the passageway and bent over. Pulling up the hem of her skirt, she loosened the bounds of a cord tied around her ankle. With one swift motion, she picked up the little parcel that had fallen and straightened, flashing a smile around in case anyone caught sight of her strange action.

Clutching the small parcel to her chest, she scurried down the passageway past guards and councilmen, and entered a small room. There several ladies sat near the fire, chatting and amusing themselves before dinner was served. She saw the one she was searching for, a small, grayish woman sitting alone and talking to no one. Recently widowed, with children fighting for her fortune, the shrewd old woman was very lonely. “I brought you a present,” Joan whispered as she sat next to the small widow.

The year was 1538, and Joan of Kent was a woman of influential opinions. A cultured and well-educated lady, she was also an avid reader of Tyndale’s English translation of the Bible and used to carry it around with her and give to people at the king’s court. Persecutions against her began, for it was greatly frowned upon for anyone other than clergy to read the Bible for themselves, much less try to understand it and talk about it to others. Due to this persecution, she soon found it necessary to conceal the Bibles. This she did by tying them underneath her clothing, so as to have them out of sight, but still within reach to secretly pass to those she felt would benefit from studying it.

It did not take long for her to be found out. Imagine for a moment what she must have been feeling. She was obviously quite wealthy and quite important. She was educated and reasonable, so why did she find it so necessary to ‘push’ her ideas of religion on others? I can tell you why. It is because she had met Someone who changed her life. She read the Bible as if it had been written to her and for her, not for the priests to have to explain everything away. Her persistance in giving Bibles away (which cost her much since Bibles were scarce and expensive) showed that she wanted to share with others the greatest gift she had ever found.

As is often the case, while most were tolerable of Joan’s acts of Bible-giving and Bible-reading, there were a few who were not, and they were rather vocal in their complaints. She was accused and imprisoned, and the commissioners had many conferences with her to change her mind. They pleaded with her, tried to persuade her, yet she remained steadfast in her beliefs. These beliefs were declared blasphemous and from the devil. What beliefs, you might ask? One of these ‘blasphemes’ was that Joan declared that Jesus did not obtain any of Mary’s fleshly nature in His birth, and she used Scripture to back her claims.

Joan of Kent was burnt at the stake in the year 1538, but her life was not given in vain. She was one of many of our Baptist ancestors who gave their lives to fight for the Bible to be commonly read. It is because of people like Joan of Kent that we are privileged to have a Bible today.

Lately, I’ve been surrounding myself with old faces – faces blurred by the past and sometimes hard to define amid the library dust. Delving into history is something that comes naturally to me. I love to hear stories about people, real people like me that lived and loved. Stories about noble conquerors and simple townspeople, fathers and sons, kings and peasants. But when you are digging these stories out of ancient volumes, it is easy to be so busy uncovering the past that you don’t put it back together the right way.

It is easy to allow history to stay removed from us. We can hear a story, know about a person’s life, have all our facts straight, and not really feel what happened to them. We can be so studious in the knowledge of what happened that we forget the characters in the story were real people too. They had hopes and dreams, feelings and aspirations, disappointments and despair.

Baptist history is one of those arenas of disconnectedness. It’s easy to get the facts down about our Baptist forefathers through the centuries, to know mentally about the price they paid for our freedom, and yet somehow forget that they were real people. Behind every great Baptist preacher who endured ridicule and scorn stood a wife or a mother, a family that hurt and endured right along with him. Behind every instance of a martyr stood friends who wept for their dear one, delivered up to the enemy. Behind every betrayal and every intrigue stood the real lives of men and women who stood for what was right, even when it cost them.

You may not think that your life is important or significant. I can guarantee you that most of these, our forefathers in history, thought the same thing about their lives. They were living, breathing people – just like you and me. They went about living their lives, wondering if what they were doing would ever make a difference. Yet the way that they lived their lives – for good or bad – had such a profound impact on ourhistory. We can learn much by looking at the past.

Over the next few months of this column, I would like to introduce to you some of my heroines – some of my favorite ladies in Baptist history. Don’t just read their facts and comprehend them…allow yourself to feel what it must have been like to be them. Think of their situation, their strength, their terror, their triumph, their defeat, and most of all, their trust in God.

“These all died in faith, not having received the promises, but having seen them afar off, and were persuaded of them, and embraced them, and confessed that they were strangers and pilgrims on the earth.” (Hebrews 11:13)